The Native Forest Restoration Trust officially came into being with the signing of its Deed of Trust on 17 July 1980, forty years ago. The first event to celebrate this important and exciting milestone was the planting of 1200 trees and shrubs at Ed Hillary Hope Reserve on Saturday 18 July 2020. This 467ha reserve to the west of Hamilton honours both the Trust’s founding Patron and the Hope family who, despite farming the property for many years, protected the mature native forest on its steep slopes. Flat and gently rising land was cleared for pasture and it is this area, close to the car park, which is being actively revegetated with plants grown from seed gathered from the mature forest.

Planting days require a great deal of preparatory work, which began on 16 July when Honorary Ranger Bill Carlson took the first load of plants from the Waikato Ecological Restoration Trust’s nursery at Mystery Creek to the reserve. The plants were loaded on to his ute and large trailer in his lunch hour, and unloaded at the reserve by torchlight at the end of Bill’s working day, with help from the Trust’s Reserves Manager Sharen Graham.

Two more loads of plants were similarly moved from the nursery the following day, the exact anniversary date, and subsequently unloaded and laid out in appropriate locations at a rather more convenient time of day. Special thanks to a gang of willing helpers, and in particular, to Dave Matthews, who has generously provided transport and hours of work for many previous plantings as well. NFRT was grateful to have the use of the Ruatuna Trust’s recently purchased community trailer for this task.

After relentless heavy rain on planting days for the last 3 years, 2020’s anniversary planting was blessed with wonderful weather. Sunshine entices more volunteers and around 30 people came to plant, all of them experienced planters who had the plants all in the ground within a couple of hours, with expert assistance from some very young children who diligently collected plant pots as fast as planters could empty them. This is a big extra task on planting days and these young people kept on task until the last tree was in the ground. 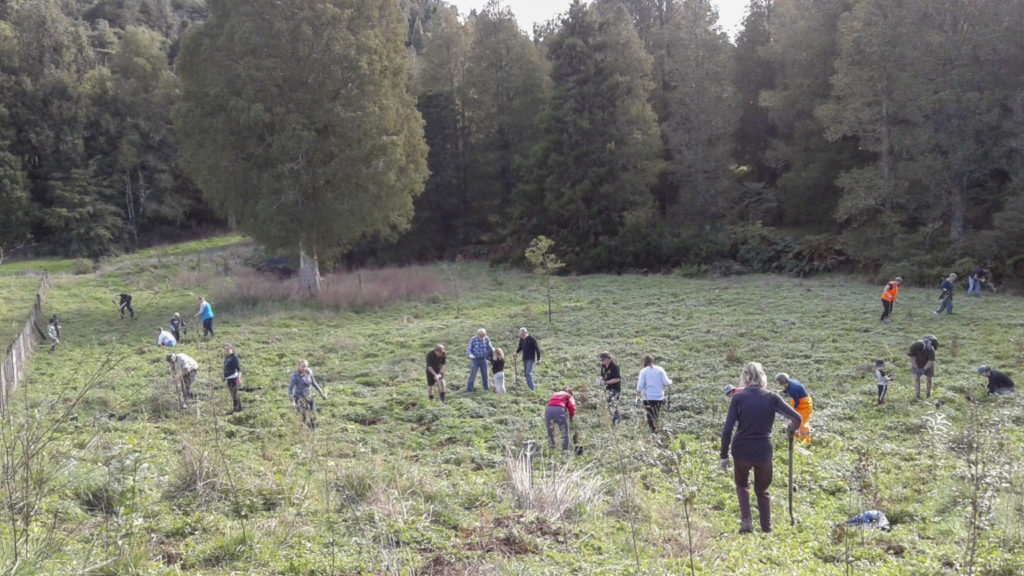 Around 30 people came to plant

NFRT staff and trustees sported new orange hi viz vests with the Trust’s logo – a development that arose from the difficulty for volunteers trying to identify organisers on earlier planting days. It is hard to tell who is who when everyone is wearing drenched wet weather gear.

While many volunteers had to leave when the planting was over, the reserve’s magnificent and commodious picnic table was fully occupied by those who could take the time for lunch in the sun. A smaller group stayed on for a walk into the naturally regenerating areas and further to the mature forest which was at its best with sunlight highlighting the diversity of shades of green in the canopy, the more yellow green shade of the many mature kohekohe (Dysoxylum spectabile) particularly prominent. It was an auspicious start to the Trust’s season of celebration of the many achievements of the last 40 years.