Edith Symes, Raglan ChronicleGumboots, raincoats and woolly hats were the order of the day as 200-odd people sloshed across a muddy field alongside Old Mountain Road and into a marquee last Saturday to celebrate the opening of the Ed Hillary Hope Reserve, a large tract of forest and farmland flanking the Raglan deviation. 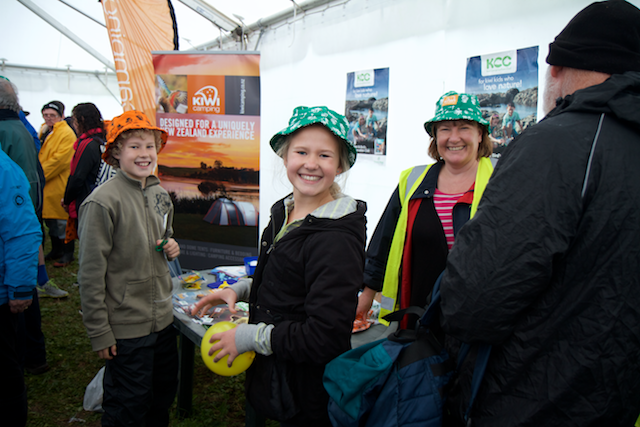 So persistent was the rain that parking in the paddock was restricted to four-wheel-drive vehicles, and all other guests were directed by Raglan’s Maori wardens to leave their cars back at Waitetuna School from where they were ferried by minibus to and from the lunchtime event.

Neither rain nor the biting cold however appeared to dampen the spirits of the tentful of keen conservationists, least of all Peter and Sarah Hillary who were “delighted” to be there as guests of honour to represent their famous father.

The wet weather was “perfect for growing and regenerating trees”, Peter Hillary told an audience mostly comprising enthusiasts and officials from the trust, Waikato Regional Council and family of the late Waikato district councillor Michael Hope, who first helped protect the bush and farmed the land for 70 years.

The keen mountaineer was not long back from Nepal where, he said, he helped in recovery work following the recent earthquake devastation through the Himalayan Trust founded by his late father in the 1960s.

Peter endorsed the work of the Native Forest Restoration Trust in reversing New Zealand’s “environment of degradation”, and conserving our heritage generally. He spoke of fostering pride in places like the Ed Hillary Hope Reserve and “bringing our young people here” to learn from the environment – a fitting sentiment given a large group of Hillary scholars from Waikato University were also at the gathering.

“If it (the reserve) becomes part of who we are then it has a future,” he insisted Founding NFRT trustee Geoff Davidson said the trust had now heaved a collective sigh of satisfaction at the opening of the reserve and had proudly – in the words of Sir Ed – “knocked the bastard off!”The reserve has 180 hectares of established forest and 280 hectares of farmland that the trust says is “well suited” for restoration. Its proximity to both Raglan and Hamilton – flanking both sides of the deviation on SH23 and adjoining the Four Brothers Scenic Reserve – means the area will potentially have “great public access and high recreation value”, trust manager Sandy Crichton told the Chronicle before Saturday’s function.

It’s also the largest protected native bush block within 20 kilometres of Hamilton, and will be a major link in the regional council’s Halo project which aims to bring native birds such as tui and bellbirds back into Hamilton city where they once flourished.

A barbecue of venison sausages and billy tea was provided for guests before they headed to the warm sanctuary of home.