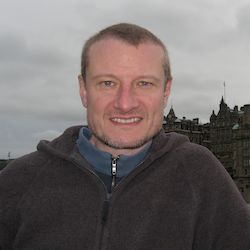 Testifying to the Trust’s high reputation, the position of Manager attracted a strong field of applicants from whom the clear choice was Sandy Crichton. He began work in January and has quickly become part of the team, handling our affairs with the skill and diplomacy this key position requires. Sandy, who belongs to the NZ Ecological Society and to the Chartered Institute of Ecology & Environmental Management, comes with a proven record as a project manager, conservationist and protected species consultant. He has particular interests in the NZ falcon and this country’s native bats, with expertise in survey methods for these species. ‘Forest & Bird’ magazine carried his illustrated article “On a wing and a prayer” in its May 2009 copy. Sandy’s communication skills, and background operating in or with the voluntary sector have special relevance to his appointment with the Trust.

Sandy’s professional qualifications and training are well suited to his work with us. His early experience in Britain included voluntary work on an archaeological and museum project where he designed and prepared educational resource material. He went on to complete a BSc Honours degree at the University of Sussex, which has a strong reputation in the sciences, before securing a Research Assistantship with the University of Cambridge on the field behaviour of meerkats. After several years of business experience in the UK, Sandy came to New Zealand in 2003 attracted by opportunities at Otago University where he gained a Postgraduate Diploma, awarded with Distinction, in the field of Natural History Filmmaking and Communication. The endangered NZ falcon became a particular focus while working alongside the Ornithological Society in efforts to promote awareness of the bird’s need for protection, especially among landowners and forestry workers. At the same time, while acting as a voluntary consultant in Otago, Sandy set up a video company, Catskill Films, to make the documentary “Karearea, the pine falcon”. This won awards at many film festivals worldwide, including top awards at Reel Earth Film Festival 2009. Three years in Britain first as a filmmaker, then as an ecologist concerned with ecological surveys, habitat management and protected species conservation, preceded Sandy’s return to New Zealand. We are confident that Trust supporters will welcome our new manager’s part in the effective working of the Native Forest Restoration Trust.