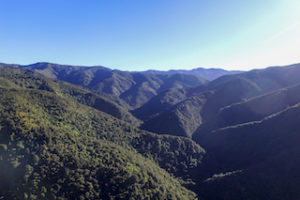 Pigeon Bush Reserve lies between the Remutaka and Tararua Conservation Parks just west of Featherston. It borders the southern side of SH2 and extends right over the range to the Wairarapa / Wellington railway. It forms a conspicuous backdrop to Featherson and the lower Wairarapa. At 1157ha it is by far our largest reserve.

The land has been farmed since the 1860s and was eventually almost completely cleared. Since the second world war gorse began to take over, but native regeneration is now very dense. As there was pressure to subdivide for lifestyle blocks the Trust was fortunate to have been able to secure such a large piece for permanent protection.

Originally the reserve was a mixture of black beech, podocarps and northern rata with small pockets of hard beech on the gentler slopes. Today a mosaic of secondary beech and broadleaf forest, manuka shrubland, gorse and remnant stands of beech and northern rata trees is spread throughout the reserve. There is a small patch of grassland by Prince’s Stream.

No detailed survey of fauna has been done, but New Zealand falcon, kingfisher, morepork, fantail and kereru are frequently seen. A native snail, a species of Wainuia has also been found.

The link the reserve makes between the Remutaka and Tararua Conservation Parks expands the forest boundaries in an ecologically significant way, providing an assured corridor for wildlife. The lowland beech forest present on the reserve is the most rare of all the lowland forests in the Tararua Ecological Area, so more representation of this type is important. The visual satisfaction of an unbroken forested line along SH2 and behind Featherston is realized as lifestyle development gradually encroaches into these areas of high scenic value.

Plant pests in the reserve are wildling pines, gorse, and broom. The gorse and broom act as a good nursery for native plants, but are a fire risk. Old Man’s Beard and Japanese Honeysuckle are nearby on the road to Featherston. Any road re-alignment needs to be carried out in a manner to avoid introducing weed species. Goats, pigs and possums are present on the reserve, as well as the lesser rodents and mustelids. The Department of Conservation and the Geater Wellington Regional Council help with the control of the larger pests.

Follow SH2 out of Upper Hutt and climb up to the Remutaka Summit. The reserve starts 1.8km along SH2 above the road on the south side. The boundary follows the road until the deep bend when it angles away slightly. The road edge then becomes Tararua Conservation Park with our reserve beyond up to the ridgeline. The reserve finishes just before the rest area near Featherston, so as one looks back from there the immediate slope is private land with the reserve running from the ridge onwards. A good view can be had of the eastern slopes from Western Lake Road out of Featherston.