The property is situated on the northern fringe of the Waipoua Forest, along the northern flank of Parataiko Range, and extends down to Waimamaku River in the Wekaweka Valley below.

The main 112 hectare part of the Wekaweka Valley Reserve joined the Native Forest Restoration Trust reserve portfolio in 2017 following a successful public fundraising appeal. The site had previously been identified as a significant conservation area, with two small areas of land purchased that sit within this larger block. The total area now owned by the Native Forest Restoration Trust is 120 hectares.

The reserve joins up with the Waipoua Forest Conservation Park (12,410 hectares) which is part of the largest remaining forested area north of Auckland, covering over 32,000 hectares. The Waipoua Forest is internationally significant for conservation and home to our largest Kauri trees, along with a multitude of rare and threatened plants and animals. The forest remnant on this reserve plays an important role in buffering and strengthening these significant forests, as well as providing important habitat.

The reserve includes wonderful examples of successful natural regeneration after periods of farming and logging. The topography of the property, which stretches from the river flats at 280m above sea level, to the edge of the Waipoua forest plateau at 540m above sea level provides the ideal conditions for a range of native plants.

The regenerating riparian forest at the river’s edge, which is considered to be a significantly threatened habitat, gives way to secondary growth broadleaf-podocarp forest as it climbs the hillside. The variety of native plants and animals found at the property, and in the surrounding areas, is vast.

Majestic Rata stand tall in the forest, with Kahikatea, Rimu and Swamp Maire all regenerating within the reserve. Scarlet Mistletoe was found close to the site in 2011 – the only known plant in the Northland/Auckland mainland region.

There is an abundance of native birds; you might get a peek of Kererū (New Zealand pigeon) or be accompanied on your stroll by cheeky Pīwakawaka (fantails). Miromiro (Pied tit), Tūī, Riroriro (grey warbler), Pīpīwharauroa (shining cuckoo) and Kōtare (sacred kingfisher) may also put in an appearance for you. At night you can hear the kiwi call – the area is a stronghold for the North Island brown kiwi.

Bat surveys in the area indicate a strong presence of the small and endangered Pekapeka-tou-roa (New Zealand long tailed bat) that roosts in tree cavities and emerges at dusk to feed.

The Waimamakau River, which runs along the northern edge of the property has been identified as potential habitat for Whio, or Blue Duck. With continued protection from predators in the area, this could be another native species to be reintroduced.

The reserve is also perfect habitat for Kōkako, which live in the surrounding areas. The ongoing predator control work has helped the local Kōkako population increase to over 60 pairs and this property could provide the perfect habitat for them to grow into.

One of our main priorities is access to the property, which is currently via a bridge that has been deemed unfit for public use by a surveyor. We will also be looking more closely at establishing walking tracks in due course.

Everyone is welcome to visit our reserves, at your own risk. Some hazards inevitably exist in such steep wild terrain. Before you go into the outdoors, tell someone your plans and leave a date to raise the alarm if you haven’t returned. 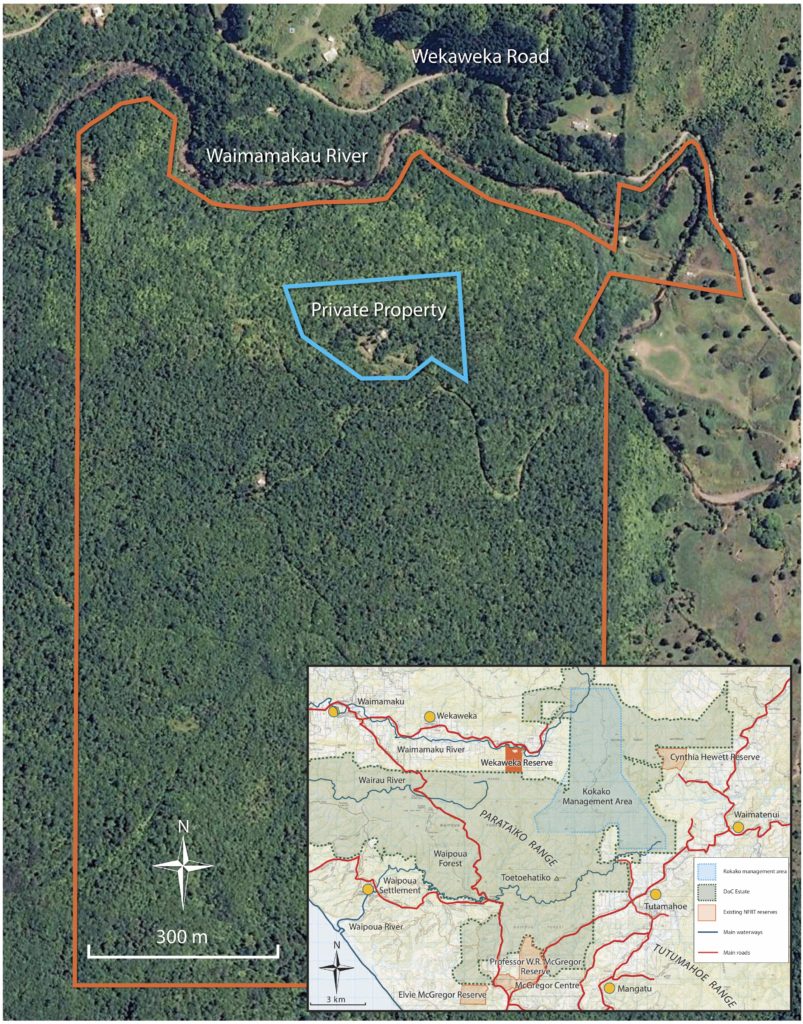 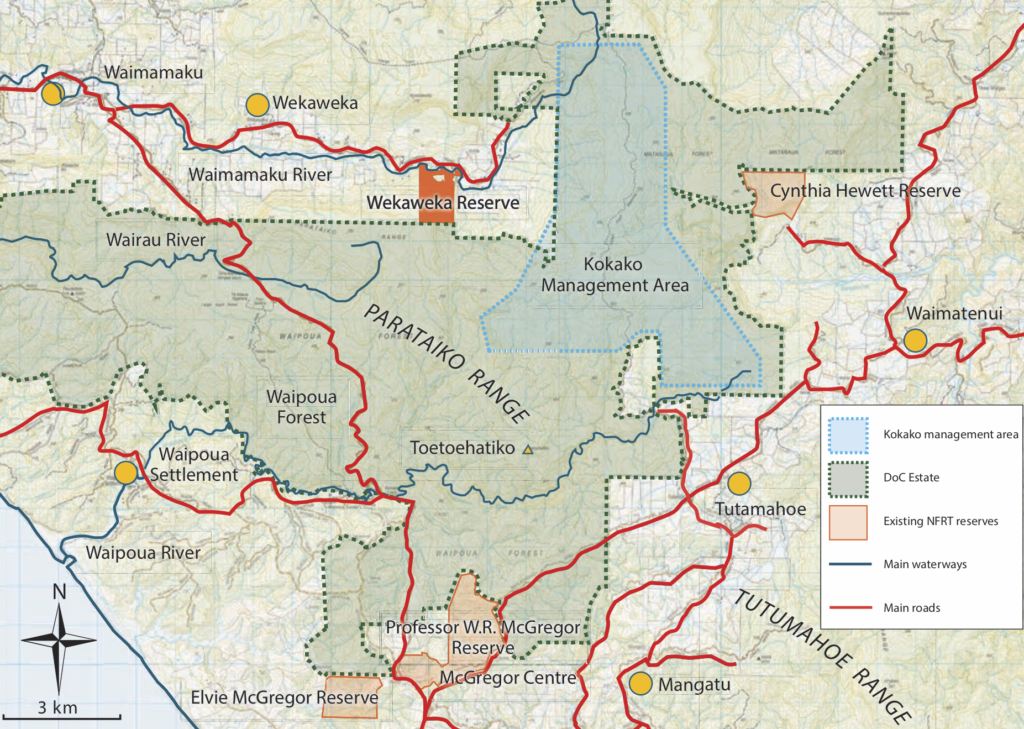