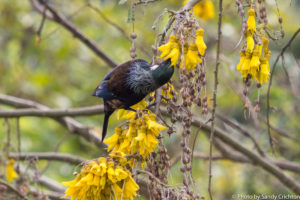 The William Upton Hewett Memorial Reserve is north-west of Whangarei, between Pipiwai and Titoki. The Papakuri Scenic Reserve is nearby to the north, but the other surrounding land is predominantly farmed. The 242ha block is regenerating shrubland on the upper slopes and Kauri/Podocarp/Broadleaf forest in the gullies with a large kahikatea swamp along the eastern stream boundary.

The block was formerly owned by Mr Jack Kennedy who had for many years recognized its conservation values and had resisted tempting offers by companies wishing to plant pines there. During 1984 the Wildlife Service inspected the property and recommended that it should be added to the conservation estate. However this never happened. Finally in 1991, it was purchased under the Trust’s Memorial Forest Scheme by Mr Basil and Miss Cynthia Hewett of Cambridge to commemorate their brother who was killed in the Second World War.

Manuka/kanuka shrubland is the dominant vegetation, but there are many young canopy species coming through. Kahikatea swamp forest with kowhai, cabbage tree, raupo, flax and swamp maire is found on the flatter areas by the stream. The more mature podocarp and hardwood forest is confined to the valleys, with kauri, rimu, tanekaha, totara, mahoe, rangiora, mapou and putaputaweta. Of special interest is Hoheria angustifolia, Pseudopanax anomalus and a large variety of native orchids.

The diverse vegetation habitats provide for a correspondingly diverse wildlife. The North Island fernbird is a regionally threatened species and is declining nationally; the reserve appears to have the best population in the Whangarei area. There is a small kiwi population as well as grey warbler, kingfisher, native pigeon, pied tit, morepork, pukeko, spotless crake, fantail and a large tui population which is very noisy when the kowhai are in flower.

As a habitat for threatened species the reserve has been classified by the Department of Conservation as having outstanding value, particularly the swamp area. Very little of original native habitat remains in the district and many regenerating areas are unprotected. Much of the reserve contains vegetation that is unique in the area.

Just off the road, the reserve entrance has a carpark and noticeboard. From the carpark there is a 15 minute climb up to the ridge where there are extensive views. There are three loop tracks, the longer one taking 4-6 hours. The Fantail Loop track (shown as the red line below) was cut and re-marked at the end of 2017. The extended Jack Kennedy Loop track (shown as the black line below) is currently closed while similar work is carried out. Allow time to listen for the ‘tuk tuk’ sounds of fernbirds. If you stand and wait they will often come to check you out. The track skirts the edge of the swamp by way of a boardwalk. The boardwalk requires some repairs so please take care while walking over it.

As part of their generous bequest the Hewetts established a fund to pay for ongoing management of the reserve. Funds such as these are vital for the long-term survival of reserves.

Ongoing weed work is necessary to keep the highly invasive willow leafed hakea, wilding pines and pampas under control. Along the stream is a large infestation of Tradescantia which has spread down from private land further upstream making control or eradication difficult. Bio-control beetles have been released to help control this weed.

Animal pests include possums, goats, pigs, cats, mustelids and rodents. All these pose a threat to the endangered flora and fauna of the reserve.

The reserve is north-west of Whangarei on Wright Rd. From Kamo, turn west into Pipiwai Rd and turn left into Wright Rd before crossing the Hikurangi river. From Maungataupere take the Kaikohe Rd. After 14km turn right into McCardle Rd, then into Wright Rd. The entrance is approximately 1.3 km on past house No. 222 on the eastern side of Wright Rd where there is a grass carpark and noticeboard. Entry is at your own risk.